BOTOX ® has been used successfully for a variety of cosmetic purposes and functional disorders. The diverse benefits of BOTOX ® include its well-known use for wrinkle reduction but also improvement in headaches (tension-type and migraines), reduction of oversized jaws, treatment of TMJ pain, balancing asymmetric faces, treatment of excessive sweating, breaking bad facial habits and ticks, elevating mood and eliminating depression, reduction of a gummy smile, turning the corners of the lip upward, reduction of saliva leaks, treatment of facial pain, among many other usages.

Although Dr. Lam uses BOTOX ® for many functional problems, his main expertise and experience concern excellent cosmetic uses of BOTOX ®. Accordingly, this tutorial will focus almost entirely on the way that BOTOX ® can be used for immediate cosmetic benefit as well as for long-term prevention of wrinkles and aging.

The safety of BOTOX ® has been called into question for two reasons. First, the product has the word “tox” or “toxin” in it, as in “botulinum toxin type A”. However, BOTOX ® is a very safe product, as it has been in clinical use for close to 30 years and should be thought of as more properly a purified protein, which it is. Further, some recent reports with side effects of contaminated “BOTOX ®” have made prospective patients leery of its use. However, these cases in Florida arose from fake BOTOX ® that was not FDA approved and NOT MADE BY ALLERGAN. The maker of this fake product has already been given jail time for this criminal offense. Dr. Lam only uses FDA-approved Allergan-manufactured BOTOX ® for his patients, which has proven its safety and efficacy over the past quarter century.

How does BOTOX ® work?

In order to understand the benefits of BOTOX ®, you must understand how it works. Many people think of BOTOX ® as a filler to fill in wrinkles like Restylane®, Radiesse, or other dermal fillers. However, BOTOX ® is NOT a filler. BOTOX ® works by blocking a muscle from moving so that your wrinkles look better immediately and begin to fade over time with continued usage.

Without a long and unnecessary digression into tedious science, it may still be worth investigating how exactly BOTOX ® works on your muscle. For the scientifically minded, read on. For the tepid scientist, you may skip this section and move on to the next one that has more clinical import. If you remember from high-school biology, nerves communicate with one another through a small gap known as a synapse. BOTOX ® works on the very last synapse that a nerve makes with the muscle itself, known as the motor endplate. At the presynaptic junction (where the nerve releases the neurotransmitters to make the muscle move), BOTOX ® blocks a neurotransmitter known as acetylcholine from being released, which induces flaccid paralysis. As the main nerve is blocked from moving, new nerve endings begin to sprout up at about 28 days following BOTOX ® injection but are not entirely functional. After 91 days, the parent nerve ending is fully recovered and restored, which correlates with the clinical longevity of BOTOX ® in most cases.

This scientific data is important for the reason that BOTOX ® is absolutely temporary in nature and does not induce any permanent muscle atrophy or impairment. In fact, the original investigators of BOTOX ® found that no muscle atrophy arises after decades of BOTOX ® usage. So is the myth that BOTOX ® lasts longer the more you use it correct then? Not really, at least the claim is not founded on scientific merit. Perhaps, this observation may be related to the retraining of the brain not to move that muscle as vigorously over time. For example, many times people with bad habits like excessive frowning that lead to creases between their eyes assert that after several months to a year that they begin to forget how to engage in that behavior. Also, recent reports have suggested that not being able to frown following BOTOX ® has permitted the brain to feel less depressed since frowning is an overt, physical manifestation of depression. These are interesting explanations of how BOTOX ® may favorably affect the brain not to create wrinkles over time.

What areas of my face should I have BOTOX ® done?

BOTOX ® can be used almost anywhere on the face but its most common usage is treatment of wrinkles in the upper face, more specifically, the crow’s feet around the sides of the eyes, the frown lines between the eyes, and the forehead wrinkles. For the sake of clarity, we are going to evaluate the specific anatomy of each of these areas and the effect that BOTOX ® has on each anatomic zone. For a better understading of the anatomy, Dr. Lam has filmed a video tutorial on how to use BOTOX ® in the upper face and how to use BOTOX ® in the lower face. 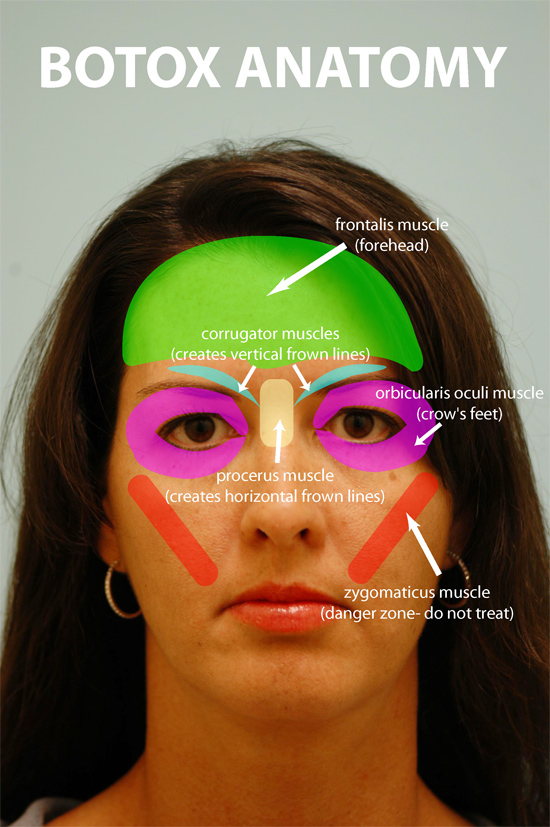 The muscle that surrounds each eye is known as the orbicularis oculi and is responsible for closing your eye but also for generating the wrinkles around your eye known as the crow’s feet. BOTOX ® is injected directly into the crow’s feet to soften the orbicularis-oculi muscle so that during frowning and squinting your wrinkles are dramatically reduced. Unfortunately, oftentimes not all wrinkles around your eyes are totally eliminated with BOTOX ® for the simple reason that as you smile, the other muscle in the cheek that pulls upward, known as the zygomaticus muscle, also causes wrinkles. If you try to block all the wrinkles around your eyes that extend into the cheek (i.e., block the zygomaticus), your speech and smile can be adversely affected.

The orbicularis-oculi muscle also tends to pull the brow down during its action so that blocking this area can lead to unopposed elevation of the brow. Therefore, treatment of this area can result in a browlift if you should so desire. The extent that the brow is lifted is dependent on three factors. First, if the forehead muscle is strong enough to lift the brow upward, then the brow will go up. Second, if the wrinkles in the forehead do not extend too far out to the side that if treated with BOTOX ® would not permit the brow to raise. Third, the treatment of the crow’s feet must be very high right below the brow itself to block the depressing muscle activity of the orbicularis oculi and thereby encourage the brow to lift upward unopposed.

The second area that may be important to treat is the zone between the eyes, known as the glabellar frown lines. There are two types of wrinkles that occur in this area, the vertical lines or “number 11’s” (as these wrinkles look like an “11”) and the horizontal lines that are a bit lower down on the upper part of the nose. The vertical lines are created by the horizontal pull of the paired muscles known as the corrugators. The horizontal lines are created by the vertical pull of the muscle known as the procerus. Treatment of this area can relax the muscle to make you look less tired and angry and can also minimize the bad habit of constantly frowning that some people do. It can also work great if you play poker!

The final point that should be understood is how each of the above-mentioned areas works in harmony. When all three areas (the forehead, the frown lines, and the crow’s feet) are treated at the same time, you can receive the most harmonious result, but this is not necessary in all cases. A customized plan is recommended for each person. For example, if someone has a very weak forehead muscle and the forehead muscle is the only area treated, the pull-down effect of the frowning muscles (the corrugators and the procerus) and the crow’s feet (orbicularis oculi) can lead to the forehead coming down a bit. This rare occurrence can be easily improved by placing BOTOX ® into these pull-down muscles to alleviate the pull-down forces and achieve the desired balance.

There are two immediate benefits that BOTOX ® offers. The first benefit is making you look unbelievably more rested, youthful, and vibrant. Relaxing the muscles in the face can make you look more relaxed and refreshed. These two examples show how BOTOX ® has relaxed the facial muscles so that the individual appears more alert and relaxed.

The second major benefit of BOTOX ® relates to the improvement in one’s face during facial animation or expression. Unlike popular belief, good BOTOX ® does not eliminate all facial expressions but instead selectively softens the negative expressions like frowning, squinting, or excessive wrinkling of the forehead. However, smiling, laughing, and other positive emotions are fully retained. Further, during these expressions of joy, all of the emotion is kept but a lot of the wrinkles are reduced.

BOTOX ® should not be considered merely a luxury therapy performed only for temporary improvement in facial lines. A recent twin study showed that the twin who had regular BOTOX ® treatments over 13 years compared to her twin who only had it twice during that time had many fewer wrinkles and also looked significantly better. (Binder WJ, Long-term effects of botulinum toxin A (BOTOX ®) on facial lines: A comparison in identical twins. Archives of Facial Plastic Surgery 2006;8:426-431.) This gallery shows individuals whose wrinkles have faded over time only with BOTOX ® usage. Remember wrinkles can only get worse over time without BOTOX ® or better over time with BOTOX ®. The best analogy to understand how BOTOX ® works in the short and the long-term is thinking of the skin as a shirt. Your skin like a shirt is something you wear every day. If you continue to wear a shirt, you will also continue to create wrinkles and creases in it. That is what happens to your skin over time. Fine lines and wrinkles that may only be apparent when you smile or frown become progressively deeper etched in lines even when you do not move your face.

Taking your shirt and putting it on a hanger is like the effect that BOTOX ® has on your skin. Even though the creases and wrinkles are still there, over time the wrinkles continue to fade. At the very least, the wrinkles do not get worse over time if you keep the shirt hanging on the hanger. Early lines that are not so deep can actually begin to fade entirely away with consistent use of BOTOX ®.

This 36-year-old woman has undertaken routine BOTOX ® treatments every 3 to 4 months for the past 9 months (and nothing else) and shows that her early wrinkles have almost entirely faded over that time. This 52-year-old woman has undertaken routine BOTOX ® treatments every 3 to 4 months for the past year (and nothing else) and shows that her early wrinkles have almost entirely faded over that time. This 44-year-old woman has undertaken routine BOTOX ® treatments every 3 to 4 months for the past year and a half (and nothing else) and shows that her early wrinkles have almost entirely faded over that time. This 42-year-old man has undertaken routine BOTOX ® treatments every 3 to 4 months for two consecutive years (and nothing else) and shows that his relatively deep wrinkles have almost entirely faded over that time. Only his forehead was treated, as he elected not to treat his frown lines between his eyes. This 42-year-old woman has undertaken routine BOTOX ® treatments every 3 to 4 months for the two and a half years (and nothing else) and shows that her moderately deep wrinkles have almost entirely faded over that time.

This 49-year-old man has undertaken routine BOTOX ® treatments every 3 to 4 months for over 3 years (and nothing else) and has shown significant improvement in the deep central crease of his forehead.