Scooped, Straight, High, and Low Bridged Noses: My Personal Aesthetic View on the Bridge, or Dorsum, in Rhinoplasty

Scooped, Straight, High, and Low Bridged Noses: My Personal Aesthetic View on the Bridge, or Dorsum, in Rhinoplasty

When we talk about rhinoplasty, we are focused on both the technical skills as well as the artistic judgment of the surgeon.  If you visit 10 surgeons you will most likely encounter 10 slightly or greatly different aesthetic perspectives on aesthetic rhinoplasty.  Generally, there is an agreed-upon fundamental aesthetic, e.g., very humped noses and bulbous nasal tips are probably less desirable to most practicing rhinoplasty surgeons.  However, subtle variations differ among surgeons and my goal in this blog is to describe how my views have emerged and how I apply those aesthetic principles over wide-ranging types of noses.

First, I think that the very pinched, over-scooped noses of the 1980s have fallen into disfavor for the serious, modern rhinoplasty surgeon.  This may not always be the case as I review some of my colleagues’ work but I think that categorically an over reduced nasal bridge that has a relative concavity to it does not look natural to an observer, which is obviously the most important attribute of a nose that it look undetectable and natural.  The ski slope nose that was a dominant fixture of 1980s and can still be seen in 1980s music videos or for those who have lived through that era and not had a revision rhinoplasty should be roundly condemned as an unnatural relic.  I always try to maintain a straight nasal profile, as my mentor taught me, “God never made a scooped nose only man did.” 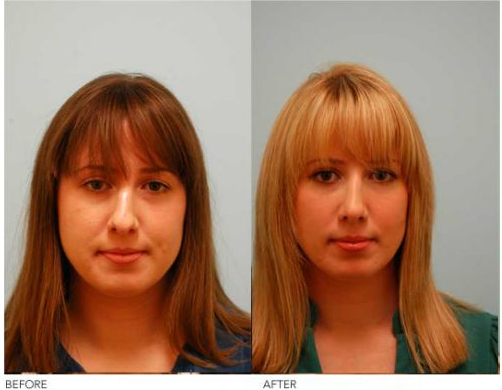 This young lady had a combination of reduction in her nasal bridge and refinement in her nasal tip to create a balanced result for her overall aesthetic appearance.

If we can first agree on a straight nasal bridge as the ideal (with an exception that I will make in a moment) then how high should that nasal bridge be when a surgeon either lowers it in most cases or raises it in certain ethnic noses?  That is the heart of the question that will be dealt with here.  In men, I tend to keep a relatively high nasal bridge because it is more masculine and sometimes I even discourage a man to undergo a rhinoplasty (in certain cases only) if I think his nose will become feminized through rhinoplasty.  At other times I reduce the nose but leave a small “bump” on the nasal bridge because I think that it retains a more masculine profile.  Obviously, I would only do this with preoperative digital morphing for a patient as well as collaboration and discussion with him.

The other time I prefer a relatively higher nasal bridge is in the Middle Eastern patient, particularly of Persian or Iranian descent.  I tend to see way over reduced nasal bridges in Middle Eastern patients that I think make them look artificial because the bridge does not match the facial features.  The opposite is true for most Asian noses.  I find that Asian noses are way over elevated to reach Caucasian proportions.  I tend to start my nasal bridge at the point midway up the pupil rather than at the top of the eye, which is more preferred for a White nose.  Ethnic variations and preservations will be a topic of another blog but suffice it to say that these principles of ethnic preservation are important when deciding on how to approach an ethnic nose. 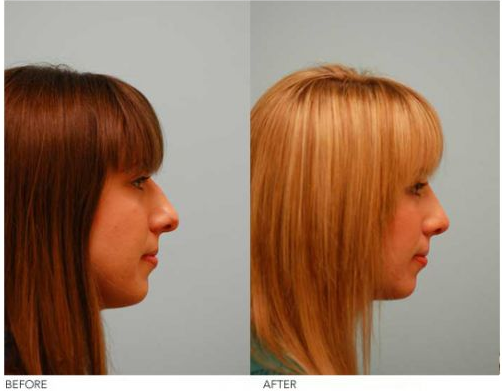 This young lady had a combination of reduction in her nasal bridge and refinement in her nasal tip to create a balanced result for her overall aesthetic appearance.

Although Photoshop allows one to reduce, raise or shape a nose in any way desired, it is not necessarily realistic because a nose has structure and must be able to breathe afterward so a surgeon does not have absolute liberty in reducing or raising a nose to one’s desires.  In addition how the framework of the nose relates to the overlying skin architecture (a subject of a future blog) is also a consideration that limits what a surgeon can potentially do for a patient.

In summary, despite anatomic limitations mentioned in the previous paragraph, the surgeon’s artistic sensibility is fundamentally important when judging the candidacy for a surgeon to work on your nose.  This article has hoped to provide some basic aesthetic guidelines to how I approach the nasal bridge, or dorsum, in cosmetic rhinoplasty.

Click to learn more about Dr Lam’s rhinoplasty procedures, including photos, videos, forums and FAQs, or call 972.312.8188 to schedule a consultation.